Deli Home is committed to training employees. All our employees have the opportunity to follow short or long-term training courses aimed at improving their health and vitality. These courses can vary greatly, from a marketing training program and various safety-related training courses, to communication training courses and program for earning a truck driving license. In 2019, Deli Home’s activities included actively training ergo coaches and managers under the ‘Focus’ initiative and our absenteeism management process.

A new system for performance appraisals was designed in 2019 in order to effectively embed personal growth and training for employees throughout the company. In 2020, managers will be trained in this new approach and will be able to use it afterwards.

In addition, internship opportunities have been established for VMBO (IPVE), MBO (SSVE), HBO (HVE) and WO (Se) students at the Deli Home sites in Gorinchem and Zevenaar.

Deli Home started two programs in 2019 to further develop talent within the company; a Young talent development program and a Management development program. Esther Jansen, Corporate Communication Specialist (28 years), is one of the young people who have been selected for the Young Talent Development Program.

‘It’s a fun and educational program to be part of. I see it as an investment in myself and I feel appreciated by Deli Home because someone nominated me to participate. The aim is to grow within your job or prepare yourself for the next step in your career, whereby the company helps to develop and retain young talents. The first step was to compile a personal development plan. What do you want to work on in your personal development, and what does the company and your department need? Over a period of 2 years, we receive monthly training from an external training agency in various management skills and personal development.

The training is very practical and, in many cases, the acquired knowledge can be immediately applied to your working environment. For instance, there are various ways of communicating with colleagues, like when inspiring them for a project or providing constructive feedback. Each person is different; and any situations that you find difficult can be practised with an actor. It is the aim to also actively focus on your personal development and learning goals outside the training courses, including by evaluating your practical implementation on a monthly basis. This assessment will make it possible to work with the HR manager and your supervisor to monitor progress in your personal development plan and to modify it if necessary.

Because Deli Home invests so much in me, I feel very motivated to fully commit myself to this initiative. I see internal opportunities to develop and grow within the company. You also notice the group becoming more tight-knit and more willing to support each other. It is sometimes hard to keep up with all the training sessions and do the assignments in combination with our regular work, but we all think it is more than worthwhile!’ 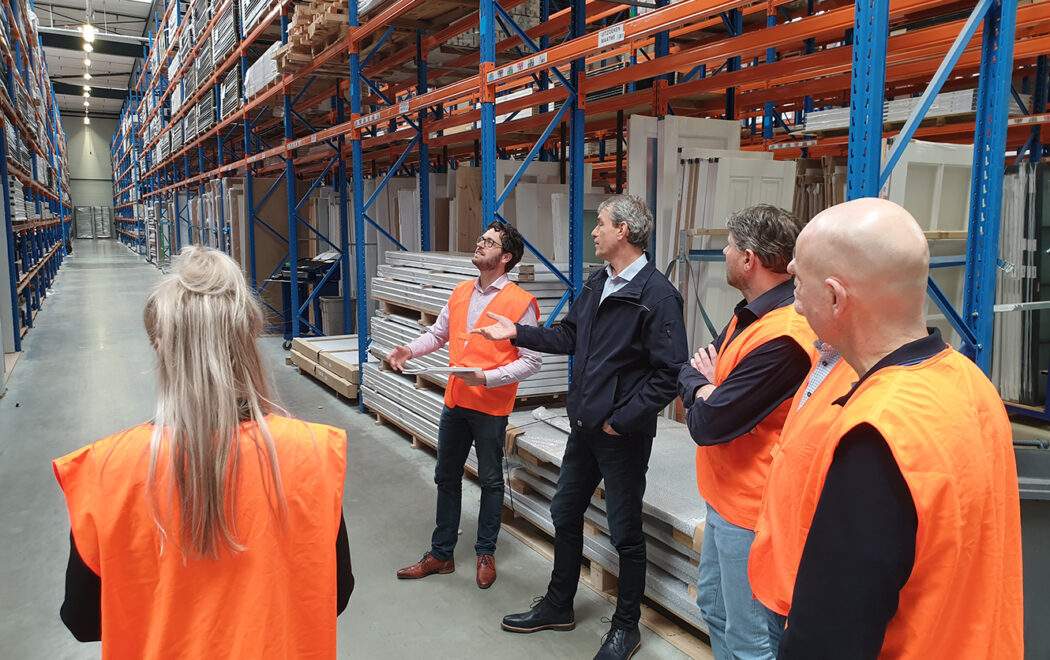 Under the guidance of an external consultancy, managers were first trained in participative management. After that, workshops were organized for groups of employees to generate and implement improvement proposals. This ‘bottom-up’ approach actually resulted in many ideas. For example, this resulted in further digitization in the workshop: All products are issued a barcode, which means it is clear what must be done with particular products during the whole production process. This is also possible in the past, but we worked with notes, which increased the risk of errors. Moreover, the new approach is more efficient.

Communication between the warehouse and the workshop has also been improved. We now have a better understanding of the methods and requirements in other departments; and agreements are clearer on all sides. Things went so well that we decided to create a ‘process improvement’ department. We will certainly continue to improve further, for example, by introducing morning meetings in every department. Everyone’s input matters! 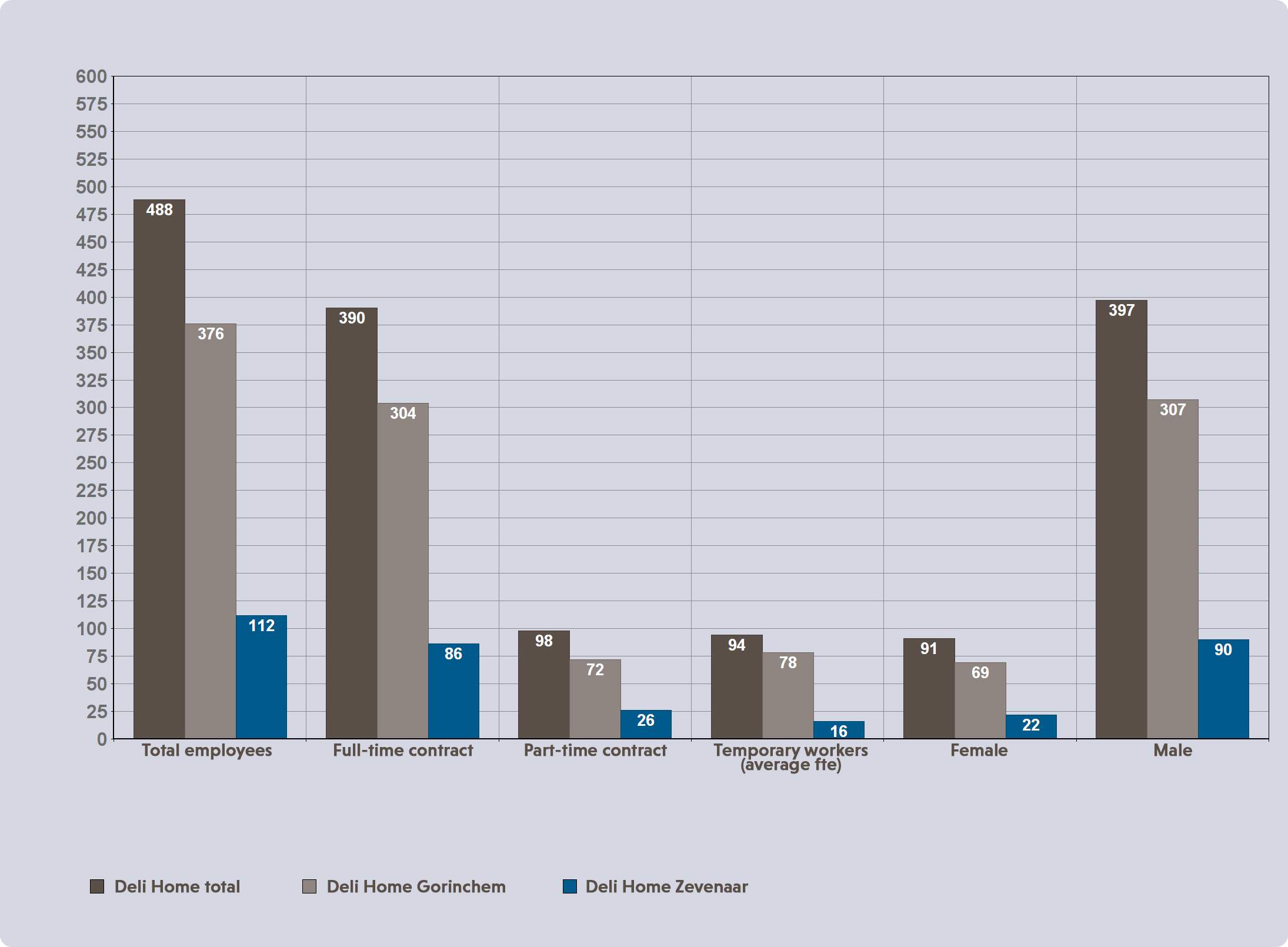 In 2019, 488 employees worked at Deli Home (status 31 December). 376 of them worked in Gorinchem and 112 in Zevenaar. Most employees have a fixed contract. In Gorinchem, in particular, temporary workers were employed during peak moments. 71 employees departed in 2019 and 42 new employees were hired. The male-female ratio was 81%:19% in 2019.

Safety is essential if people want to work effectively. That is why various risk assessments and evaluations (RI&E’s) were carried out in Gorinchem in 2019. This year’s topics were: Machine safety, logistical safety, fire safety and the reduction of physical loads.

An RI&E had been carried out for the entire company in Zevenaar in 2018. That is why heavier doors were placed at optimum lifting height in 2019. A decision was also made to install tilting supports in the workshop, so doors can easily be lowered horizontally from a vertical position. This will be realised for all workstations in 2020.

The LTIF (Lost Time injury Frequency) factor, i.e. the number of incidents resulting in absenteeism per 1 million worked hours, was 17 in Gorinchem in 2019. This amounted to 6 in Zevenaar. Over the past 10 years, the average LTIF in Gorinchem was 18.3. This means LTIF has remained fairly constant. Fortunately, only relatively minor injuries were involved, mostly caused by wanting to work too quickly. However, we are very shocked that a colleague died in during industrial accident in 2019. The truck that he was driving tipped over, and he was crushed underneath it. The whole company took the time to contemplate this terrible event. The accident was thoroughly evaluated and new safety policy was compiled subsequently.

In 2018, we implemented a pilot with ergo coaches in one of our warehouses. Due to its success, the initiative was rolled out further in 2019. Our policy is to promote vitality, so employees remain healthy in body and mind. The plan was to train 15 employees, who could coach their colleagues to work in a manner that is less physically demanding. In 2019, 5 employees had already been trained.  This was done based on an ESF subsidy. A further 10 employees will be trained in 2020. In 2019, preparations were also made for vitality-related projects that were implemented in 2020, like a discount for a sports club and the start of talks about sustainably deploying employees over 45 years of age. 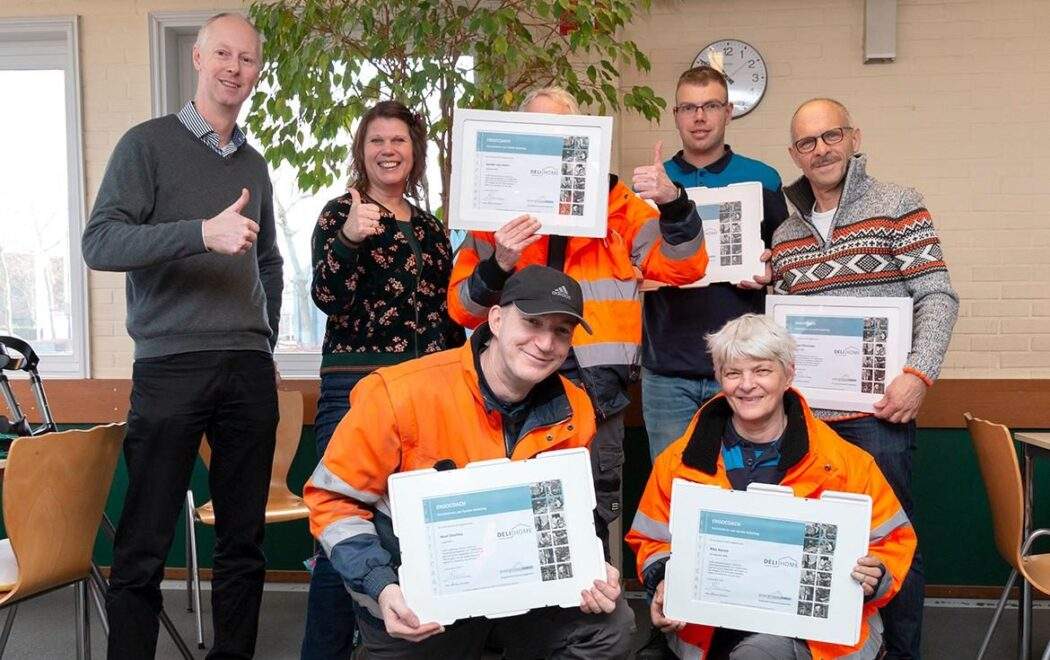 It was very common to lift heavy things in the past but, fortunately, this is no longer the case now. However, to my surprise, you can also encounter physical complaints if you lift light things often enough. In Hall P, we produce all kinds of slats and plinths weighing between 2 and 4 kg.

When they asked who wanted to be trained as an ergo coach for our team, I decided to register. I think the most important thing is to stand behind the product and keep it close to you, even if the products are light. This sometimes means taking an extra step towards the product.
The alternative, which we regularly encounter at the moment, is bad for you in the long-term because you stretch your arms and move your upper body to the left or right.
If I, and now my colleagues, had overloaded a pallet of products, we often had to stretch our back or make a second trip. I had already shown how things could be done differently, but people thought it took too long. But I timed it for them with a stopwatch and it turned out not to be the case at all!

During the exam for the coaching training, I had to coach my colleague Rianne Coenrade. She works in another department, where films are rolled out and lifted. This work is certainly more demanding. In the beginning, she was not very enthusiastic about the coaching. However, she became my biggest promoter when it transpired that she was no longer so tired in the evening and no longer had that aching pain in her back! She said that the instructions had opened a whole new world for her.

I think people have the tendency to be lazy. Even I had difficulties becoming more active, but things have now become easy for me. I enjoy jogging and love riding my bike. A few years ago, I weighed way too much and that really was the turning point for me.
I also enjoying supporting my colleagues. By showing them the results; by demonstrating things and by using a bit of humour.’ 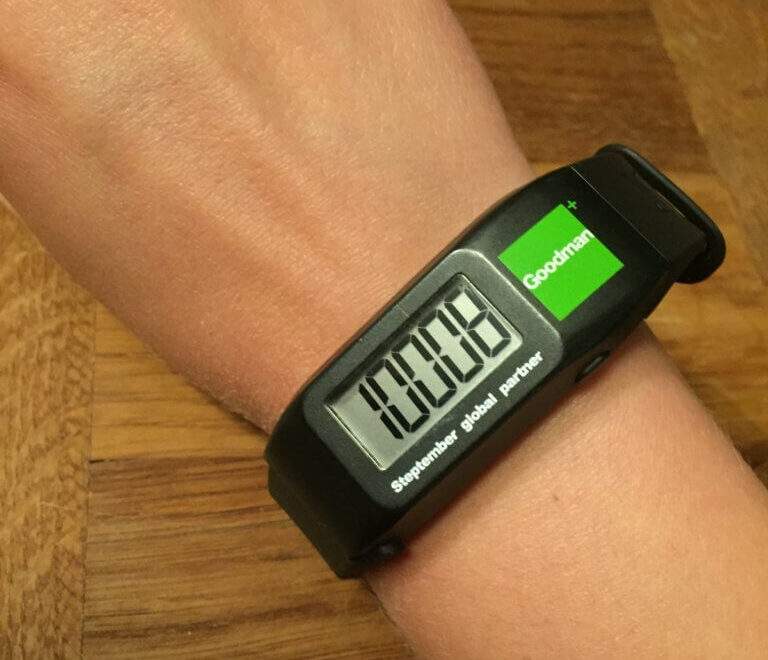 We first took part in ‘Steptember’ in September 2019. This initiative encourages colleagues to become active by walking for charity. The charity in question conducts research into cerebral palsy in children. Also see: https://www.steptember.nl/.

The challenge is to take 10,000 steps a day (bikes and other activities can also be converted to ‘steps’). Colleagues could take part in teams and Deli Home gave people a little boost by handing out step counters and skipping rope during the kick-off event. The team with the highest average number of steps per member also received an allowance towards a team excursion. A total of 23,116,713 steps were taken and €2,014 was raised by the participants!

Our goal is to promote vitality for all employees by implementing a wide range of instruments, as described above. We measure their effect via our absenteeism rate. In 2019, this was 3.8%. This means we met our target of maximum 4% absenteeism. This was 6.0% in 2018.